1071 reasons you may want to buy rather than rent

The evil omen in Minecraft is a curse or status effect that has a standard duration in the game. In this article, we will teach you all about omen in Minecraft. What is it, how to get rid of it and much more? 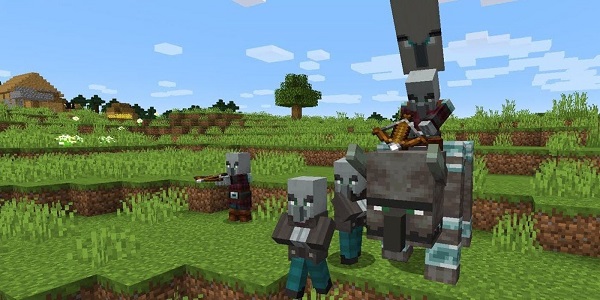 The Bad Omen is an effect that falls on Minecraft players as a consequence of killing a raider captain. The captain can be distinguished from the rest of the raiders or Pillagers because he is the one who carries a banner on his back with the characteristic design of his clan. These naturally form like villagers and are found in “Raider Outposts,,” Patrols or by Raiding villages.

When a group of players attacks a Raider Captain, only the one who lands the final blow gains the ill omen, whether they do so directly with their weapon or using a tame wolf. Upon death, the pillager captain drops a banner as an item and a warning animation will then be displayed on the affected player’s screen. Also, it is important to know that the bad omen is cumulative up to level 6 (VI).

Note: In the Bedrock version of Minecraft, Bad Omens does not stack on levels or tempo. Instead, each time a “Raid Captain” is killed, the 100-minute counter resets.

What is it for or what does this effect do?

The ill omen initiates a Raid event in any village the affected player reaches, meaning aggressive raiders will appear and players will need to fight them off. Additionally, the higher the level of the effect, the better armed the enemies will be, which will make it more difficult to defeat them in each encounter.

The main disadvantage is its duration of 100 minutes, that is, 1 hour and 40 minutes, since the constant attack by looters would prevent other activities from being carried out normally. There are also the effect indicator bubbles constantly floating around the player, which can be visually annoying. The advantage is that a lot of experience and other rewards can be gained by defeating raiders during the raid.

How to remove the effect?

There are different methods to eliminate the Bad Omen and continue enjoying exciting adventures in Minecraft. The different alternatives are listed below:

Die: When a user dies in Minecraft, all effects they possess, both positive and negative, are removed. Therefore, the bad omen could be eliminated by dying, but a percentage of the experience is lost, so it is not the best method.

Drink milk: Milk is another option that allows you to cleanse negative states such as Bad Omens. To obtain milk, it will only be necessary to use a bucket on a cow to milk it and then drink it to remove the effects.

Using the End portal: Another way to avoid the consequences of the bad omen is to enter and exit the END. Using the exit portal will remove all effects on the character.

The time limit expires: A slightly later option is to wait for the effect time to expire and avoid going to a village or town during its activity period. The time to wait is 1 hour and 40 minutes.

Additionally, it is important to know that when you go to a village, the visual effect disappears. However, this results in the Assault event. Once this event has started, the player must fight the raiders, as the effect will reappear if they run away.

A bad omen is a long-lasting debuff in Minecraft that can have advantages or disadvantages, as it can be an excellent opportunity to have adventures and gain experience. If the player prefers to avoid the assault, the best alternative to remove this effect is to drink a bucket of milk.