The Nazca Lines. Mystery of the Peruvian Desert

We all pretty much know what tanks are currently made off. Steel strengthened and armoured for the most part with rods and layers. However there is also increasingly the use of plastics for some of the internal parts in an attempt to try and reduce the tanks overall weight.  A tank is not the most economical of vehicles and anything that can help it move around the battlefield is welcome to the people who pilot them. Tank design has also started to favour the aerodynamic and even sculpturing to deflect any shells that are fired at it. Even more impressive is the advent of stealth technology being incorporated into the tanks appearance. There are also moves to create a tank that shimmers into the background and ones that attempt to disrupt the eyes when you look at it. Whilst you might not be able to have a go with the most modern tanks you can still get an idea of what’s involved by going on a Tank Driving Experience with armourgeddon. What about the early tanks? What were they made from? 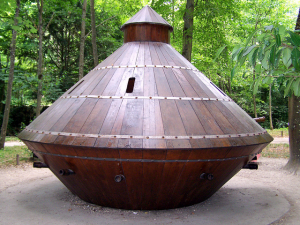 You might be extremely surprised to learn that the first tank was not made of metal. In fact, we are not even talking about a model tank, we are concerned with the very first tank or at least a motorised vehicle that could enter into battle protecting the soldiers inside. As ever, it was the work of the artisan inventor Leonardo Da Vinci whose work saw the first real attempt at making a tank. This was a wooden teepee shape vehicle that powered its way into the fight only four wheels powered by two men pedalling inside. Given the state of weapons at the time, it’s easy to see that Leonardo was thinking about how he could translate the Galleys and Galliases of Venice and its naval power (back then the Italian port ruled the waves) onto a land battlefield. Sadly, it was never made but yet again we can see that Da Vinci had all the best ideas first.

Fast forward to the early twentieth century and a conflict that even Da Vinci could not have foreseen. The Great War is at a stalemate and something needs to be done to protect allied troops when they advance. Enter the tank. The first were made out of solid panels of wrought iron riveted together. Inside was a loud belching engine that filled the cabin with acrid fumes, smoke and heat. Whilst it was not pleasant it was very protected by the iron and the machine gun was finally cancelled out.